The project is expected to reduce CO2 emissions by approximately 505,000 tons per year. We are sharing information about a very ambitious bioenergy facility. The Finnish municipal energy company Lahti Energia Oy announced that its Kymijärvi III biomass-fired heat plant, which is currently being completed, had produced and supplied the first heat to the district heating network. The plant, which will be completed shortly, will be tested for operation over the next six months before commissioning.

The new power plant will replace the existing Kymijärvi I coal-fired boiler with a capacity of 350 MW, which expired in 2020.

The power plant will generate heat for the district heating network of Lahti. If wood biomass becomes unavailable, the plant will use peat and coal as reserve fuel.

The annual production of Kymijärvi III will cover approximately 40% of heat consumption in the Lahti region. Increasing the use of biomass diversifies the energy balance and adds value to biomass collected in NIB member countries (Nordic Investment bank).

The new biomass CHP is designed according to the best available technologies.

It is expected that heat recovery will improve the overall efficiency by 10-15%.

The construction of Kymijärvi III is part of the city’s strategy to halve CO2 emissions by 2025 compared to 1990 levels.

The project is expected to reduce CO2 emissions by approximately 505,000 tons per year.

Emissions of sulfur dioxide and nitrogen oxides are estimated to be reduced by 50% (approximately 600 tonnes per year), but particulate matter emissions are expected to increase slightly. It is calculated that the concentrations of harmful substances in the environment are much lower than the control and threshold values of the ambient air quality standard.

The noise level in neighboring residential buildings due to the proximity to the energy production area is estimated to be lower than the reference values of the Finnish national recommendations.

The new plant is equipped with a flue gas heat recovery system, and condensate from the heat recovery system is treated to remove sulfates. Thus, the heat load and the average discharge of cooling water into the recipient lake Vesiarvi are estimated to be reduced, and the project is not expected to increase the sulfate concentration in the lake.

It is estimated that the amount of waste, mainly fly ash and ash, is approximately 27,000 tons per year.

The plant is estimated to create about 80 new permanent jobs in the harvesting and transportation of wood. 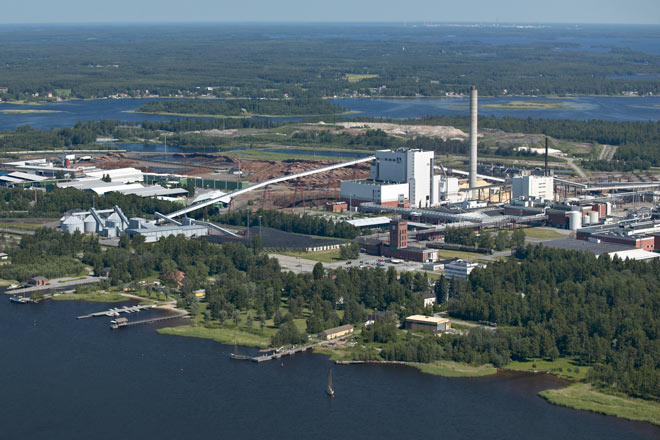